Growing population, mega projects, growing income per capita, urban renewable projects, and ease of buying property are the main driving forces behind the rapid growth of the real estate sector in Turkey.


Turkey boasts arguably the best-performing real estate market in the world and 2016 has shown to be no exception. The country’s nationwide house price index rose by 13.98% (4.76% inflation-adjusted) during the year to July 2016, according to the Central Bank of the Republic of Turkey (CBRT), significantly slower growth in real terms than the 18.75% (11.18% inflation-adjusted) growth recorded during the same month last year.

With new infrastructure developments in and around Istanbul, including new highways and public transport, have led to increases in property prices, improving access to areas previously less attractive to commuters and Istanbul is currently seen by international real estate investors as a winning bet. 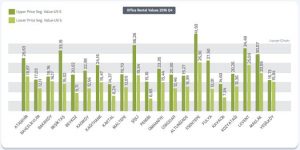 The Turkish government amended the reciprocity law in 2012 that opened the door for foreigners to buy property in Turkey. In 2015, 22,991 houses were sold to foreigners In Turkey according to the Turkish Statistical Institute. Istanbul ranks first with 7,493 sales, Antalya with 6,072 sales, Bursa with 1,501 sales and Yalova with 1,425 sales.

Foreign ownership in Turkey is ruled by the reciprocity principle. Citizens of countries that allow Turkish citizens or legal entities to own property in their country are allowed to acquire property in Turkey. Citizens of most EU countries (except for Belgium, Cyprus, Czech Republic and Slovakia), the United States, Canada and other countries in Asia, Latin America and Africa can freely purchase properties in Turkey.